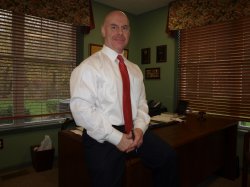 As a graduate of Montville High School, he attended Seton Hall University where he earned his Bachelors of Science. He then continued to New York Chiropractic College to obtain his Doctorate of Chiropractic. He continued in his studies in sports injuries and physical fitness and achieved his Certified Chiropractic Sports Physician (CCSP) degree.

Dr. Duddy has also completed courses and obtained his certification in Hospital Protocols as well as training in concussions as recognized by Youth Sports Training and the CDC. He is CPR certified.

Dr. Duddy is a member of the Association of New Jersey Chiropractors as well as the NJ Chiropractic Council on Sports Injuries and Rehabilitation. He holds licenses in both New York and New Jersey.

Dr. Duddy’s sports background includes 2 years as Head Wrestling Coach of Parsippany High School (1985-1987) as well as a year coaching at his alma mater, Montville High School. Dr. Duddy spent 15 years (1986-2001) as Team Physician for the Montville Bronco Football Teams and one year as Team Doctor for New Jersey’s Junior National Wrestling Team (1995). He has had a paper on “Steroids and the Chiropractic Physician” published in Chiropractic Sports Medicine in 1989.

He has also spent many seasons coaching Little League baseball and youth wrestling and was twice named Tri- County Wrestling Coach of the Year. Dr. Duddy has competed as a natural bodybuilder, winning numerous awards.

Dr. Duddy was named Montville Chamber of Commerce Citizen of the Year for 2002 and was elected to the Montville Township High School Hall of Fame in 2005.

Dr. Duddy was honored as NJ Sports Chiropractor of the Year for 2015.

Font Resize
Contrast
Accessibility by WAH
Call Us Text Us